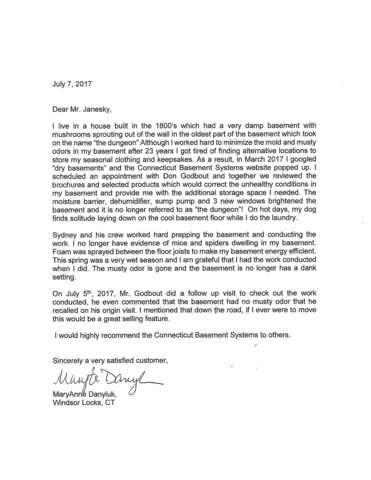 I live in house built in the 1800’s which had a very damp basement with mushrooms sprouting out of the wall in the oldest part of the basement which took on the name “the dungeon.” Although I worked hard to minimize the mold and musty odors in my basement, after 23 years I got tired of finding alternative locations to store my seasonal clothing and keepsakes. As a results, in March 2017 I googled “dry basements” and the Connecticut Basement Systems website popped up. I scheduled an appointment with Don Godbout and together we reviewed the brochures and selected products which would correct the unhealthy conditions in my basement and provide me with additional storage space I needed. The moisture barrier, dehumidifier, sump pump, and 3 new windows brightened the basement and it is no longer referred to as “the dungeon”! On hot days. my dog finds solitude laying down on the cool basement floor while I do the laundry.

Sydney and his crew worked hard prepping the basement and conducting the work. I no longer have evidence of mice and spiders dwelling in my basement. Foam was sprayed between the floor joists to make my basement energy efficient. This spring was a very wet season and I am grateful that I had the work conducted when I did. The musty odor is gone and the basement no longer has a dank setting.

On July 5th, 2017, Mr. Godbout did a follow up visit to check out the work conducted, he even commented that the basement had no musty odor that he recalled on his original visit. I mentioned that down the road, if i ever were to move this would be a great selling feature.

I would highly recommend the Connecticut Basement Systems to others.

Back to Previous Page
Back to Testimonials