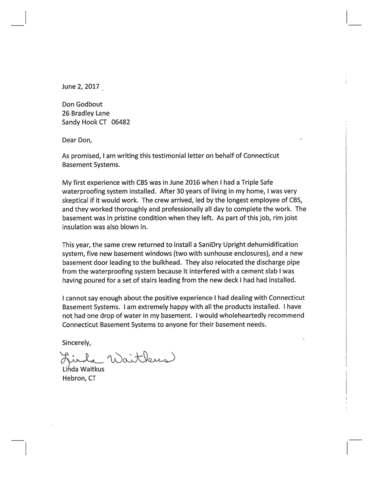 As promised, I am writing this testimonial letter on behalf of Connecticut Basement Systems.

My first experience with CBS was in June 2016 when I had a TripleSafe waterproofing system installed. After 30 years of living in my home, I was very skeptical if it would work. The crew arrived, led by the longest employee of CBS, and they worked thoroughly and professionally all day to complete the work. The basement was in pristine condition when they left. As part of this job, rim joist insulation was also blown in.

This year, the same crew returned to install a SaniDry Upright dehumidification system, five new basement windows (two with sunhouse enclosures), and a new basement door leading to the bulkhead. They also relocated the discharge pipe from the waterproofing system because it interfered with a cement slab I was having poured for a set of stairs leading from the new deck I had installed.

Back to Previous Page
Back to Testimonials