The 1500 square foot home was built in the 1950s and was constructed of masonry block with wood framing. Years of poor drainage around the foundation caused the clay backfill soils around the home to add significant pressure to the basement walls, causing them to crack. All four foundation walls of the home displayed cracks consistent with those of a bowing basement wall. The south wall in particular, however, worried the homeowners the most as it was bowing inward more than 3.5”. Even though the basement was only being used for storage, the south wall was bowing to the point that the homeowners no longer considered the basement safe. They knew they needed to get the problem resolved quickly and permanently.

Although a number of repair options were considered, Connecticut Basement Systems recommended that (20) PowerBraces™ be installed to permanently stabilize the failing foundation walls, allowing the homeowners to regain use of their basement. Due to close property lines and rocky soil conditions, the PowerBrace™ System was chosen as the ideal solution. In total, twenty PowerBraces™ were installed to stabilize all four foundation walls of the home. Each beam was secured to the concrete floor at the base and to the wood floor system at the top. Additional blocking was installed throughout the floor joist system to ensure the load would be adequately transferred throughout the floor system. On the south wall, which was experiencing the most severe bowing and damage, additional cross-beam supports were installed between the PowerBrace™ beams to ensure proper wall stabilization. Even though multiple obstacles along the wall proved to be a challenge during installation, Connecticut Basement Systems was able to install all 20 PowerBraces™ in less than two days, and the homeowner was able to once again able to regain use of their basement. 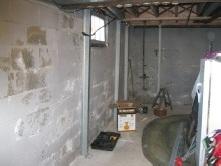 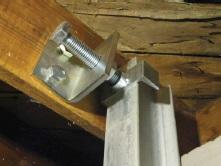 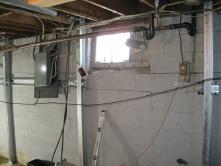 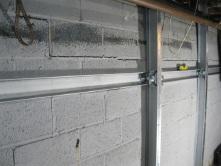