This Stamford, CT crawl space was damp, drafty and a perfect environment for mold growth. The homeowner became concerned with this environment because it was directly affecting the health of the rest of her home. After doing her research, she decided to set an appointment with the experts at Connecticut Basement Systems.

On the day of the appointment, Sales Representative Rick Raucci arrived at the home to inspect the crawl space. The crawl space was supporting mold growth since it was drafty and damp which was caused by cracks and holes in the floors and walls. This is something that Rick has seen in many homes and the good news was that Connecticut Basement Systems offers a plethora of solutions. After his inspection, he talked to the homeowner identifying problematic areas in the crawl space. The first to be addressed were the floors and walls of the crawl space that were allowing unwanted moisture and air to enter which would create a damp and drafty environment. The solution to this problem would be to install CleanSpace liner which is a bright white liner that will prevent moisture and air from passing through. By keeping the crawl space dry, it will protect the structure from mold or rot. In order to keep humidity low and ensure that mold growth will not be supported, a SaniDry Sedona dehumidifier could be installed to control this problem. As a high-efficiency ENERGY STAR® certified dehumidifier, the Sedona removes more moisture (100 pints per day) for less electricity cost than conventional models. After reviewing all of her options, the homeowner decided that the CleanSpace liner and SaniDry dehumidifier would be the perfect solution for her crawl space and decided to move forward with the project.

On the day of production, Foreman Garfield Sanderson and his team installed the products efficiently and professionally. The crawl space was completely transformed and instantly made a difference in the home. The homeowner was completely impressed with the transformation and was thrilled with the results. Now, this Stamford, CT crawl space is a healthier and more pleasant environment. 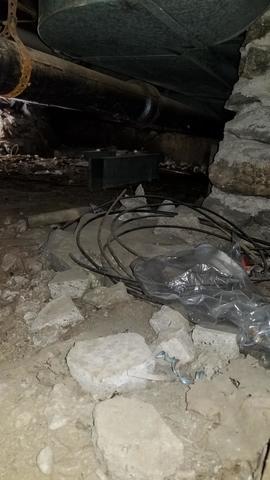 This is how the crawl space looked before the transformation. It was filled with dirt and was damp, creating an unhealthy environment. 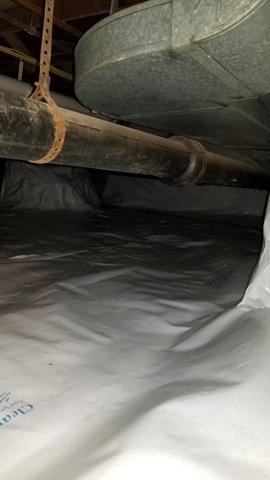 This is the crawl space transformed! You can see the CleanSpace liner and the area is much healthier!