The Y. Residence is a single-story wood-framed structure that was built in the early 1960's. When the homeowners purchased the house several years ago, they noticed two small cracks in the foundation walls – one on the front wall and one on the rear wall. Initially, they were not concerned about the cracking because the cracks were very small and they assumed some amount of settlement in a home was "normal."

However, over the many years of living in the home, they observed the cracks becoming larger and larger. The cracks were becoming so severe that they measured 3.5" wide and were causing the south wall to rotate outward to the point that the sill plate could be observed from the outside of the home. The Y's knew they had to get the problem resolved before it continued to get any worse.

Not knowing who to contact, the homeowners did an internet search on "Foundation Repair" in "Beacon Falls" and quickly discovered Connecticut Basement Systems were the local foundation repair experts and could fix their home’s settlement problem. Connecticut Basement Systems installed eight (8) Foundation Supportworks Model 288 Push Piers to permanently stabilize the settled area of the home. After excavating the soil around the foundation, L-shaped foundation brackets were positioned below and against the home’s footings and steel pier sections were hydraulic driven to depths of 8-12 feet to reach competent bearing soil.

Piers were spaced five feet apart and were driven to ultimate capacities of 38,000 pounds. Hydraulic cylinders were then used to lift the foundation back toward a level position. The large cracks in the foundation closed by nearly three inches and the south wall rotated back into position so that the sill plate was no longer visible from the outside of the home. The installation of eight push piers was completed in three days. 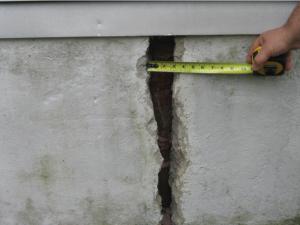 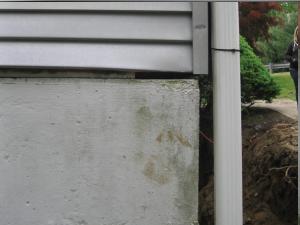 Sill plate visible from outside of home 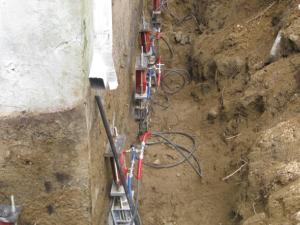 Lift cylinders connected in a series 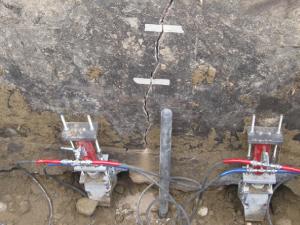