Downtown Chappaqua is undergoing a revitalization including renovation of existing older structures to support new businesses. One building in particular was constructed in the late 1800's. In the mid-1900's, an addition was constructed at the rear of the building. The building was formerly a three story, mixed use structure with retail space on the main floor and offices above. The top two floors were removed years ago, giving the appearance of a one story retail shop. The building is being renovated for a high end women's boutique.

The building was constructed within the alluvial plane of the Saw Mill River, presumably on fill soils over organic river deposits over bedrock. Subsurface information was available from a neighboring property. The rear exterior load-bearing wall of the addition had settled under the existing roof load and the self-weight of the masonry block. The project engineers planned to re-support the roof system and also remove the roof load permanently from the rear wall so the wall could be removed and replaced.

Four interior columns were proposed to support the roof load. Two of the new columns would support an existing girder while the other two columns would support a new girder positioned along the rear wall. Helical pile foundations were selected for this project due to the limited interior working space and the ability to penetrate the existing fill and soft native soils. The helical pile configuration consisted of the Model 288 (2.875-inch OD by 0.276-inch wall) with a 12-inch diameter by 1/2-inch thick single helix blade on the lead section. Twelve helical piles, three at each column location, were extended to depths ranging from 20 to 33 feet to bear on or within the bedrock. The helical piles were installed until spin off occurred on the bedrock surface or to torque values correlating to ultimate pile capacities of at least 60 kips for a factor of safety of 2 or more. The twelve piles were installed in two days. 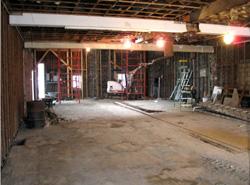 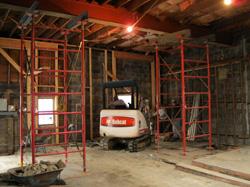 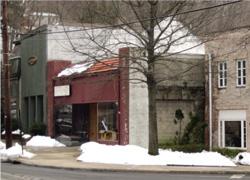 Building to undergo renovation as part of the downtown revitalization.